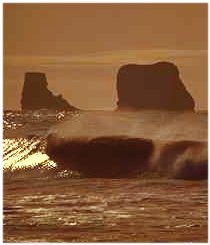 These are the first peptide antibiotics that have been isolated from mast cells of any animal, and the discovery indicates that these cells may be critical in fighting some infectious diseases.

Mast cells are immune cells which are present in all vertebrates, yet have had an uncertain role in host defense. The discovery is detailed in an article published in the Nov. 15 issue of the journal Nature.

Peptides are very small proteins, or short chains of amino acids linked together. Natural, peptide antibiotics are known to be produced by many microorganisms, plants, invertebrates and vertebrates; they can kill or inhibit the growth of bacteria and other pathogens. Noga and Silphaduang have named this new family of peptide antibiotics Piscidins.

"There is some evidence that mast cells may play a role in innate immunity, a response not directed at a specific disease, but many diseases," Noga said. He says that the isolation of peptide antibiotics from mast cells is the strongest link yet that mast cells may actually participate in the attack on pathogens rather than simply signal other cells to attack. Noga says that the antibiotics discovered are very potent, capable of killing both fish and human bacterial pathogens, including multi-drug-resistant strains.

Noga and Silphaduang say there are many implications for human health. "If human mast cells do indeed produce antibiotics, then if there is some kind of deficiency in them, that could be an important contributor to certain types of diseases," Noga said. "On the other hand, if human mast cells make these antibiotics, if they were isolated they could be useful therapeutics for treating any number of diseases."

The researchers isolated piscidins from the tissues of hybrid striped bass, an important fish for aquaculture. NC State has applied for two patents on their discoveries. Noga says that the newly discovered compounds might not be used as therapeutics themselves, but would more likely be used as blueprints or templates to design novel drugs that could be used for treating various diseases.