Gene Transfer In Primates A Success 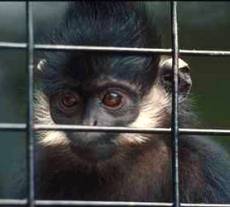 By successfully inserting a gene from a jellyfish into the fertilized eggs of rhesus monkeys, scientists have managed to make transgenic placentas in which the inserted gene functions as it does in the jellyfish.

Writing today, Sept. 11, in the Proceedings of the National Academy of Sciences, Thaddeus G. Golos of the Wisconsin Regional Primate Research Center at the University of Wisconsin-Madison, described the successful insertion of a "reporter gene" into two fertilized rhesus macaque embryos. The gene, which causes jellyfish cells to produce a robust green glow, likewise conferred this activity on the placental cells where it was found.

"The infants produced here did not carry the gene in their DNA," Golos says, "but they did carry it and produce large amounts of the transgenic protein within their placentas during pregnancy."

In mammals, the placenta develops in the uterus from the embryo during gestation. Its role is to provide nourishment to the developing fetus and to transfer fetal wastes to the maternal circulation.

This new work, Golos says, will help provide a way to explore the role that individual genes play in pathologies of pregnancy. It promises new insight into such problems in maternal and fetal health as infertility, recurrent spontaneous miscarriage, and fetal growth and low birth weight.

"These are the most important issues in terms of a healthy pregnancy," Golos says. "A healthy placenta is a requirement for a healthy fetus. Placental defects and problems are the causes of significant fetal and maternal morbidity and mortality."

Because the green-glow gene can be seen in cells, it is a much used "reporter" gene that can tell scientists that it has been effectively delivered to the host cell.

The work reported today by the Wisconsin group is important because it is the first time a gene that has been transferred into a primate embryo has been shown to be functional throughout development to a successful live birth. It also demonstrates that successful pregnancy is possible when genes foreign to the mother are engineered into the embryos of nonhuman primates.

The Wisconsin group adapted technology currently in development for human gene therapy by using extensively modified components of the genetic material of HIV as a vector to ferry the gene into the cells of early-stage rhesus monkey embryos. The vector, Golos says, is stripped of disease-causing genes and employs just a small percentage of the HIV genome to trick embryonic cells into accepting the transgene.

In effect, Golos says, the vector, which was developed by Robert G. Hawley at the American Red Cross Holland Laboratory, is used to "package the transgene into a noninfectious viral particle, and to allow the transgene to be inserted into the genome of the embryo."

The engineered embryos were then implanted in surrogate rhesus macaque mothers and carried to term. One of the pregnancies resulted in twins, but only one twin survived to term. Twin pregnancies are rare in rhesus monkeys.

Because rhesus macaques are genetically very close to humans, the work underscores the potential of the rhesus macaque as a model for future studies to establish the safety and effectiveness of human gene and stem cell therapy. The work is just a small step away from making a truly transgenic monkey, where foreign DNA is not only transferred from one species to another but is functional as well. A more immediate consideration, Golos says, is that the accomplishment forms the basis for new experimental insights into placental health and function.

Last January, a group at the Oregon Regional Primate Research Center reported the birth of a single rhesus monkey carrying transgenic DNA. Although the Oregon monkey carried the foreign DNA, the introduced DNA did not produce the protein that the transgene is supposed to make.

"This is an important distinction," Golos says, "since the success of transgenic or gene transfer studies is determined by whether or not the protein is produced."

Golos notes that the surrogate mothers carrying the engineered embryos developed antibodies to the jellyfish protein at about mid-pregnancy. Despite this immune response, the pregnancies were carried successfully to term, demonstrating that primate embryos with working transgenes are a viable experimental model for exploring how the maternal immune system accepts the fetus, whose genes are, in part, inherited from the father.