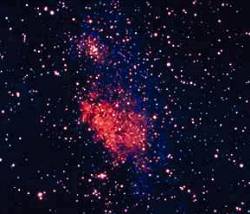 In the most precise astrophysics experiment ever made, Australian and U.S. astronomers have used CSIRO's Parkes radio telescope to measure the distortion of space-time near a star 450 light-years (more than 4 000 million million kilometres) from Earth.

Their results, confirming Einstein's general theory of relativity, are published in the July 12 issue of the journal "Nature".

The research rests on the properties of one of Nature's most bizarre objects: a 'pulsar' called J0437-4715. A pulsar is a star made of highly compressed matter. It spins, and in spinning gives off a stream of radio pulses. J0437-4715 is one of the brightest and closest pulsars of its kind and produces more than 170 pulses a second. It waltzes through space with a companion - an old, shrunken star called a white dwarf.

The astronomers have been able to measure when J0437-4715's pulses reach us on Earth to within a tenth of a millionth of a second [100 nanoseconds], thanks to sophisticated instruments developed by Caltech, leading-edge computing at Swinburne University and the large collecting area of the Parkes telescope.

This precise timing, and the closeness of the pulsar, has allowed the astronomers to determine exactly how the pulsar's orbit is oriented in space - the first time this has been done.

In the case of pulsar J0437-4715, the difference in the two views is minuscule - about four millionths of a degree. But it's enough to allow the astronomers to construct a 3D model of how the pulsar orbits in space.

Having worked out the orbit, the astronomers were able to test a subtle effect predicted by Einstein's general theory of relativity. A massive object distorts the space-time around it. In the pulsar system, the pulsar's radio waves travel through the curved space-time around its white dwarf companion, and arrive on Earth a little later than if they had travelled through undistorted space-time. The effect, called the Shapiro delay, was first proposed in 1964 by Irwin I. Shapiro, now Director of the Smithsonian Astrophysical Observatory.

"The precision of the current data is so good that we are now aiming to use the pulsar to search for subtle ripples in the space-time continuum", says Professor Bailes. Astronomers think that such ripples would be produced during the birth of the Universe or when ultra-massive black holes coalesce. To search for them, experimenters are now designing and building the next generation of pulsar instrumentation and supercomputers.

The pulsar team has a long history in the discovery and timing of radio pulsars. In 1982, Kulkarni along with Professor D. C. Backer of the University of California, Berkeley, discovered the first ultra-fast ('millisecond') pulsar which led to a series of surveys in search of similar pulsars. One such survey, made with the Parkes radio-telescope by a team including Manchester and Bailes, led to the discovery of PSR J0437-4715 in 1992.

This pulsar, with a period of 5.757,451,831,072,007 milliseconds, will gain or lose no more than 1 millisecond over a period of one hundred thousand years. "The precision of millisecond pulsars is comparable to the atomic clocks that are used to keep time. It has long been recognized that these natural clocks can be exploited for a number of tests in basic physics," says Professor Kulkarni.

The Swinburne group has dedicated an entire supercomputer, one of Australia's largest, to keep pace with the terabytes of data streaming from Parkes.