You are here: Home › News › Extra Dimensions Must Be Smaller Than 0.2 Millimeter
By Will Parker on February 13, 2001 in News 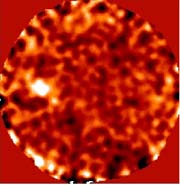 University of Washington scientists using gravity measurements to hunt for evidence of dimensions in addition to those already known have found that those dimensions would have to occupy a space smaller than 0.2 millimeter.

In making that finding, the team headed by UW physics professors Eric Adelberger and Blayne Heckel gained new insights into gravity. One of the biggest mysteries in physics is why gravity is so weak compared with all other natural forces. A small magnet suspended above a table, for instance, can easily overcome the downward gravitational pull of the entire Earth and pick up a nail.

One idea, string theory, involves “extra” dimensions. It requires that there be 10 space dimensions, and it usually assumes that seven of those dimensions are curled up in regions so tiny they cannot be detected by current technology. A new development in that theory suggests that gravity’s apparent weakness could be caused by a unique property allowing gravity to leak off into “extra” dimensions, while everything else is confined to the normal dimensions of length, width and height. Extra dimensions would be a millimeter in size or smaller and, until now, no experiment could have detected them. The Adelberger-Heckel team looked for anomalies at small distances that might signal the presence of extra dimensions.

“Gravity is the only way to see these extra dimensions but the very weakness of gravity has meant that there was no way to test the theory,” said Adelberger. “No one had even been able to detect the gravitational attraction between two millimeter-sized objects, much less see if the force could be stronger than expected.”

The UW team recently measured the strength of gravity at a distance of just 0.2 millimeter and found no deviation from the gravitational pull predicted by the inverse-square law devised by Isaac Newton. “No one had ever detected that gravity even existed at distances less than a millimeter,” said Heckel.

The research team already is fabricating equipment to test to 0.1 millimeter or less, and has begun planning an experiment to test at even smaller distances.

The findings, to be published in the Feb. 19 edition of Physical Review Letters, are based on results using a ring suspended just above a rotating disk. The ring contains 10 small holes and hangs by a tungsten fiber just 20 microns (less than one-thousandth of an inch) thick. The rotating disk, with 10 similar holes, exerts gravitational pull on the pendulum, twisting it back and forth 10 times for every revolution of the plate. The amount of twist is measured by shining a laser beam off a mirror mounted on the ring.

The device, housed in the UW’s Nuclear Physics Laboratory, has its main parts coated with gold, and a gold-coated copper foil less than one-thousandth of an inch is stretched between the ring and the disk. Those precautions are designed to prevent electrical forces from interfering with the gravitational tug being measured.

The Adelberger-Heckel team will continue trying to measure at smaller distances to explore whether some gravitational force might be spilling over from other very tiny dimensions.

“We don’t know if these ideas are right, but they are revolutionary,” Adelberger said. “There would be profound consequences if the ideas are correct.”