Earth To Mars In Two Weeks 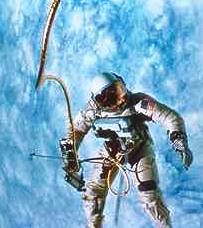 Scientists at Ben-Gurion University of the Negev have shown that an unusual nuclear fuel could speed space vehicles from Earth to Mars in as little as two weeks. Standard chemical propulsion used in existing spacecraft currently takes from between eight to ten months to make the same trip. Calculations supporting this conclusion were reported in this month's issue of Nuclear Instruments and Methods in Physics Research A (455: 442-451, 2000) by Prof. Yigal Ronen, of BGU's Department of Nuclear Engineering and graduate student Eugene Shwagerous.

In the article, the researchers demonstrate that the fairly rare nuclear material americium-242m (Am-242m) can maintain sustained nuclear fission as an extremely thin metallic film, less than a thousandth of a millimeter thick. In this form, the extremely high-energy, high-temperature fission products can escape the fuel elements and be used for propulsion in space. Obtaining fission-fragments is not possible with the better-known uranium-235 and plutonium-239 nuclear fuels: they require large fuel rods, which absorb fission products.

Ronen became interested in nuclear reactors for space vehicles some 15 years ago at a conference dedicated to this subject. Speaker-after-speaker stressed that whatever the approach, the mass (weight) of the reactor had to be as light as possible for efficient space travel. At a more recent meeting, Prof. Carlo Rubbia of CERN (Nobel Laureate in Physics, 1984) brought up the novel concept of utilizing the highly energetic fragments produced by nuclear fission to heat a gas; the extremely high temperatures produced would enable faster interplanetary travel.

To meet the challenge of a light nuclear reactor, Ronen examined one element of reactor design, the nuclear fuel itself. He found at the time that of the known fission fuels, Am-242m is the front-runner, requiring only 1 percent of the mass (or weight) of uranium or plutonium to reach its critical state. The recent study examined various theoretical structures for positioning Am-242m metal and control materials for space reactors. He determined that this fuel could indeed sustain fission in the form of thin films that release high-energy fission products. Moreover, he showed how these fission products could be used themselves as a propellant, or to heat a gas for propulsion, or to fuel a special generator that produces electricity.

"There are still many hurtles to overcome before americium-242m can be used in space," Ronen says. "There is the problem of producing the fuel in large enough quantities from plutonium-241 and americium-241, which requires several steps and is expensive. But the material is already available in fairly small amounts. In addition, actual reactor design, refueling, heat removal, and safety provisions for manned vehicles have not yet been examined.

"However, I am sure that americium-242m will eventually be implemented for space travel, as it is the only proven material whose fission products can be made available for high speed propulsion. Indeed, Carlo Rubbia has also recognized that this is the most probable fuel that will be getting us to Mars and back. I think that we are now far enough advanced to interest international space programs in taking a closer look at americium-based space vehicles."