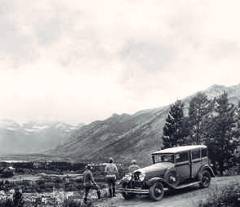 A new model of the northern Hayward Fault in California's San Francisco Bay Area suggests that a major earthquake along that portion of the fault may be less likely than previously suspected, according to a report in the 18 August issue of the journal Science.

The Hayward fault is one of the major branches of the well-known San Andreas Fault System that crisscrosses coastal California. In 1868, a major earthquake of magnitude 7 occurred on the southern portion of the Hayward, rupturing over a distance of 40 to 50 kilometers between the cities of Fremont and Berkeley.

Many scientists have traditionally believed that there is a high probability of a major earthquake on the northern portion of the fault within the next 30 years, potentially endangering lives and property in the area.

But a type of fault motion called aseismic creep, say the Science researchers, may be relieving strain on the northern portion of the fault.

"The likelihood of a large earthquake originating and centering on the northern Hayward fault alone is rather low," says the study's lead author Roland B�rgmann of the University of California, Berkeley.

Fault zone properties like temperature, stress, fluids, and the type of rock help determine whether the adjacent crustal blocks of a fault move past each other in the relatively abrupt, stick-and-slip motion that causes earthquakes, or in a more gradual, smooth motion called aseismic creep. Since at least the turn of the century, the northern Hayward fault has been showing telltale signs along its surface trace--including diverted street curbs, wavering fence lines, and cracked and distorted buildings--of aseismic creep.

These surface creep rates lag behind long-term slip rates for the fault, however, suggesting that the creep only extends for a shallow distance below the surface and that the fault is "locked" at a deeper level below, accumulating strain that would be released in a major earthquake.

To test the extent of aseismic creep on the northern Hayward, B�rgmann and colleagues integrated data from global positioning satellite measurements along the fault with satellite radar data and information from clusters of microearthquakes deep within the fault. The researchers combined these data in a model that correlates surface movements with fault slippage at depth, says B�rgmann, allowing them a 3-D glimpse of the fault zone.

Their analysis revealed a slow and aseismic creep at the bottom as well as the top of the fault zone in the northern part of the Hayward. The seismic scenario that best fits their model, say the Science researchers, is of a Hayward Fault with a split personality: a relatively immobile southern half that is locked at depth, adjacent to a freely-slipping northern segment.

Although the deep creep along the northern Hayward indicates that the possibility of a major earthquake along that portion of the fault should be downgraded, B�rgmann says that these findings do not rule out large earthquakes on neighboring fault segments, like the southern half of the Hayward or the Rodgers Creek fault that lies north of the Hayward fault.

"The studies that have been done clearly suggest significant earthquake hazard from these and other faults in the Bay area," says B�rgmann.

B�rgmann also notes that the lower likelihood of a quake on the northern Hayward has no effect on the collateral damage that might occur in this area from nearby fault events that cause significant shaking.