Back Pain All In The Mind 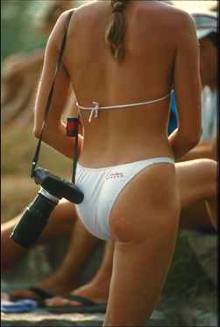 When a person suffers from debilitating lower back pain, a torn vertebral disc is often pinpointed as the cause, and physicians frequently turn to invasive surgery to correct the condition. But a new study by Stanford University Medical Center researchers indicates that these tears can be found in lots of people, even those who have no trouble twisting, turning and bending. The results suggest that the duration and severity of the pain may have as much to do with the patient's state of mind as with the presence of a damaged disc.

"For better or for worse, the identification of a certain kind of torn disc has been one of the main tools used to diagnose the cause of low back pain, and now it looks like it's a false start in many patients," said Eugene Carragee, MD, lead author of the study. He will present his findings on April 12 at the annual meeting of the International Society for the Study of the Lumbar Spine.

The study, which may revolutionize the way physicians diagnose and treat back aliments, will receive the 1999 Volvo Corporation Award for the Clinical Study of Low Back Pain. The international award recognizes research that has a fundamental impact on low back health care, which is an increasing concern in the United States and other countries.

Carragee, a Stanford associate professor of functional restoration, estimates that up to five percent of the working population in the United States is disabled by low back pain on any given day. Medical treatments and disability expenses related to the condition cost up to $150 billion each year in this country alone, he said.

Until now, tears in the vertebral discs that cushion the spine have been thought to be the culprit for most of these low back pain complaints. Like spongy coasters sandwiched between each vertebra, the cartilaginous discs protect the bones from banging against each other during running or jumping.

But if the hard coating of the disc tears or ruptures, the soft interior can sometimes protrude, pressing on sensitive nerves and causing pain.

According to Carragee, acting as the body's shock absorber takes its toll. Discs become increasingly susceptible to tears or rupture as they age. Virtually everyone will develop disc tears at one time or another, although not everyone will have painful side effects; and in those that do, the pain is usually mild or of short duration, he said.

Tears in the flat, saucer-shaped discs can appear as bright areas, or "high intensity zones" on a magnetic resonance imaging (MRI) scan. The presence of a tear is confirmed by a discography, in which a physician injects a dye into the suspect disc. Dye leaking out of the disc center into the surrounding area sometimes causes pain. Additionally, escaping dye can be confirmed with an X-ray of the lower back.

Until now, physicians have thought that the identification of a high intensity zone coupled with discomfort during a discography confirmed that the damaged disc was the source of the patient's back problems, and planned their treatment accordingly.

But when the Stanford researchers completed a rigorous comparison of the MRI and discography results of 96 patients with known risk factors for disc degeneration, they found something surprising. People whose discs had high intensity zones were only slightly more likely to experience back pain during normal activity than those without obvious disc problems. Additionally, high intensity zones were found in 25 percent of people who -- despite their known degenerative disc disease -- had no corresponding symptoms of low back pain.

The Stanford team concluded that the presence of the high intensity zones -- and thus torn discs -- doesn't automatically mean that the patient is experiencing pain during everyday activities, or that they will feel pain during a discography. This suggests that not every disc tear is painful, and not all low back pain results from a damaged disc.

A better predictor of pain, they found, is an abnormal result on psychometric testing administered to all the study patients before the examinations. Basically what we showed is that the amount of discomfort that people have with the injection is, in many patients, most closely related to psychological and social issues," said Carragee. They found that people with poor coping skills or who have ongoing workers compensation claims or personal litigation related to a back injury are more likely to perceive discography as painful and to have symptoms of low back pain during their daily activities.

The results suggest that physicians must be acutely aware of the emotional or psychological factors that may be affecting how patients perceive their back pain. Carragee believes it is vital to the patient's recovery to get to the true root of the problem, which may have both physical and emotional dimensions. It is especially important to avoid unnecessary, invasive and expensive treatments, such as back fusions, that reinforce the perception that the patient has a grave disease of the spine, he said.

Currently a standard treatment for severe, persistently painful, vertebral disc tears, back fusions require physicians to remove the damaged disc. The two neighboring vertebrae are then fused together to prevent painful friction between the bones and to provide stability to the spine. As many as 30,000 back fusions are performed annually in the United States, Carragee estimates, although they are often not very successful at relieving the patient's pain.

In contrast, Carragee has found that many patients respond well to reassurance and an active physical fitness program, which can improve both their back pain and sense of well being. In some people, treatment for depression can complement this supportive approach. However, if the back pain is compounded by problems at work or home, or is reinforced by pending worker's compensation issues, even more intensive psychiatric treatment may have only marginal success at relieving the patient's symptoms.