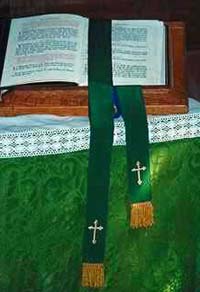 Parents who take their families to religious services regularly may be helping their children develop aspects of spirituality that are associated with the choice not to become sexually active, according to a recent study published in the April issue of the Journal of Adolescent Health.

"Spirituality is a common facet of adolescents' lives," according to researchers at the Wake Forest University School of Medicine and Harvard Medical School. "Younger age, higher spiritual interconnectedness, particularly among friends, and personal importance of religion are associated with a lower likelihood of voluntary sexual activity. Both spiritual interconnectedness and importance of religion were positively associated with frequency of attendance at religious services or bodies of faith."

Spiritual interconnectedness is defined as the supportive components of an individual's ties to friends and associates within a body of faith, said David Holder of Harvard Medical School and the paper's first author.

"This study is interesting because it officially documents something most people believe to be true - that religion plays an important role in an adolescent's life," said Robert H. DuRant, Ph.D., vice-chair for Health Services Research for the Department of Pediatrics at Wake Forest University School of Medicine and director of the Brenner Center for Child and Adolescent Health. "When children are exposed to activities in any religious faith, they develop positive relationships with other peers, they tend to view religion as important in their lives and they tend to think they have a higher purpose in life. It can be a very positive cycle."

"This study shows that spirituality and degree of social integration add to youths' ability to create purpose and meaning in their lives and to make choices of not engaging in sexual activity," DuRant said.

Mean age of the 141 respondents was 16. Over 50 percent of the subjects espoused one of four faiths: Roman Catholic, Baptist, Church of God and Pentecostal. While over 30 faiths or belief systems were represented, only 17 percent of respondents reported no faith at the time of inquiry.