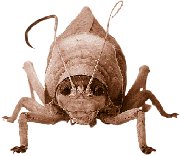 British and Swiss scientists have developed a robot with an electronic visual system based on that of a locust, enabling it to behave like a swarming insect and avoid collisions with objects.

Dr Claire Rind, of the University of Newcastle upon Tyne, showed locusts clips of the Star Wars movie to study how their eyes and nerve cells reacted to fast-moving objects and backgrounds. She hopes the robot's neural network program, which mimics part of the locust's brain, will be the basis of a collision-avoidance system for cars. The conventional approach to creating such systems involves using radar or infrared detectors, and requires very heavy-duty computer processing. Insects, however, manage to dodge objects despite poor vision and basic brains.

Dr Rind worked in collaboration with Mark Blanchard and Paul Verschure, of the Institute of Neuroinformatics at the Swiss Institute of Technology in Zurich, to model the locust's eyes and neurones as the basis of a collision avoidance system for a small, three-wheeled robot. When put into an arena of towers made from Lego bricks and set in motion, the robot avoided collisions 91% of the time, even though it had a short time to react.

Dr Rind, of Newcastle University's Department of Neurobiology, said that in the locust visual system there are several fan-shaped neurons concerned with motion in depth, known as the Lobula Giant Movement Detectors (LGMDs).

She also found that locusts distinguish between approaching and receding objects from the way in which edges of an object's image grow and move over each compound eye. The robot's visual system consists of a four-layered neural network incorporating the general features of a locust eye, including the input organisation of the locust's LGMD system.

The robot has a camera with of low resolution, which closely imitates the locust's grainy vision. Signals from the camera are processed by a neural network to provide 'edge detection' before reaching the robot's movement etector, which is designed to respond in the same way as a locust's. Nigel Clarke, principal engineer at the car company Jaguar's radar applications research unit in Coventry, has been keeping a close eye on Rind's progress.