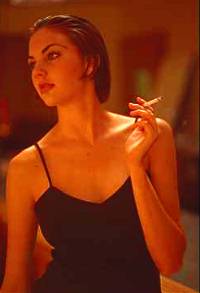 Estrogen, long known for its role in fueling the growth of breast cancer, may spur the same insidious process in lung cancer, according to University of Pittsburgh research findings being presented April 2 at the annual meeting of the American Association for Cancer Research in San Francisco. The results are the first to directly demonstrate increased growth of non-small cell lung cancer in the presence of estrogen.

"In our studies, we found greater numbers of estrogen receptors on lung cancer cells than on normal lung cells, strongly suggesting a role for this hormone in enhancing tumor growth," said Jill Siegfried, Ph.D., principal investigator on the study and vice chairman of the department of pharmacology at the University of Pittsburgh. "These results are important in understanding how lung cancer affects women."

Annually, lung cancer kills about 60,000 women in the United States, making it the leading cancer killer of women. Non-small cell lung cancer comprises 80 percent of lung cancer cases. Some population studies have suggested that women develop the disease at an earlier age and with less reported tobacco exposure than men, prompting scientists to search for biological reasons that could account for these discrepancies. Investigations by Dr. Siegfried and others have indicated that lung cancer is different in women than in men, both with regard to the type of tumors that develop and the molecular mechanisms underlying the disease.

"Women have a naturally higher circulating estrogen level than men, and this difference may contribute to their increased susceptibility to lung cancer," Dr. Siegfried remarked. "As in breast cancer, blocking the effects of estrogen could prove an important therapeutic strategy to halt disease progression or prevent recurrence. In addition, blocking estrogen receptors could prove beneficial in preventing lung cancer in women at high risk, much like blocking estrogen's effect has been shown to prevent breast cancer in women at increased risk for that disease."

The study looked at two common estrogen receptors (ER alpha and ER beta) on lung cancer cell lines, cultured normal lung cells and normal and tumor tissues from lung cancer patients. The researchers found that normal lung tissue rarely showed detectable levels of ER alpha, whereas lung tumor cells had significantly higher levels of this receptor. ER beta was found in both normal and tumor cells. Treating cultured lung cancer cells with estrogen resulted in increased cell division. Estrogen given to animals with human lung cancers resulted in increased tumor growth. Anti-estrogens inhibit this affect. All these results suggest that estrogen plays a role in lung cancer development, much as it does in breast cancer.