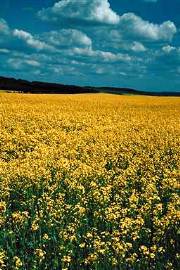 Hate tofu, but now even your doctor and mother suggests you eat it?

Well the good news is that scientists have now found an enzyme for producing genistein (the stuff that is what gives soybeans many of their health benefits) and have been able to transfer into another plant. So the theory does that if this enzyme works OK in lab tests, then it might also be introduced into mainstream food crops.

The traditional diet in Japan is rich in soy products and these are believed to play a role in the low national rate of cancer, heart and other diseases. How exactly soybean products protect us is still the subject of much scientific debate, but the most popular belief is that they impede many of the detrimental side effects of estrogen.

So if soy products are so good for us why have they not caught on in the West to the degree their health benefits suggest they should? One part of the problem has been the GM food debate, because the majority of soy food products are made from genetically modified plants. Another small part is the marketing problems faced by soy products for example use of the name 'Soy Milk'. In Australia dairy authorities went to the extent of trying to outlaw the name claiming, soy products should never be classified as 'Milk'. This seems a bit of a pointless action and what their position is on Milk of Magnesia is anyone's guess.

However two of the major stumbling blocks have been the issues of taste and the highly variable levels of isoflavone in soy products.

What this has meant is that at a consumer level for those of us weaned on diets heavily laden with dairy products, soy was easy to reject (unless your partner forces you to 'like' it).

But soyaphobics fear no longer as researchers have now identified isoflavone synthase as the enzyme responsible for isoflavone production in soy. Isoflavone's DNA was then sequenced and crossed into a yeast strain that produced was able to produce genistein. When this worked researchers realized they had identified the isoflavone synthase gene. To confirm what their previous experiments the gene was then transferred into a lab plant that does not normally produce genistein - Arabidopsis. In the new transgenic version of Arabidopsis, the isoflavone synthase turned isoflavone precursors into genistein, so the concept had been proven. Now if this can be extended into commercial crops that are destined for human consumption then we may never have to complain about the taste of soy ever again.