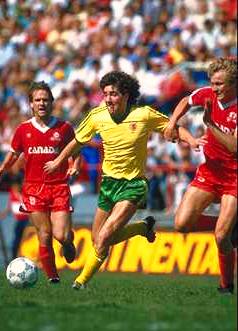 Ever been in space, been weightless or maybe just broken a limb? As much as we would love to believe that everyone at NASA reads Science a Go Go, we figure it's the broken limb brigades who are probably the majority of our audience. In any case both groups will doubtless be aware of the amount of muscle mass that is lost during immobilisation.

Well fear not, as according to a joint Japanese and American research team, heat therapy can reduce the amount of muscle mass lost during limb immobilisation.

"There are all kinds of conditions in which patients can't exercise," said Scott Powers, a professor in University of Florida's Department of Exercise and Sport Sciences. "If people can lift weights, they can retard atrophy, but if a limb is broken or a person is bedridden, they obviously can't maintain muscle mass that way."

Eight days of limb suspension was designed to replicate weightlessness.

To measure the degree of muscle atrophy researchers measured muscles for protein content and for levels of HSP72, a protein produced in the cells by excessive heat and known to protect cells from some types of damage.

In the groups that had heat treatment, researchers found lower levels of muscle atrophy and much higher levels of HSP72. In the rats that received no heat therapy HSP72 levels were 35-40% below normal.

Powers believes elevated HSP72 levels counter the reduction in protein synthesis caused by muscle disuse. As HSP72 has a half-life of only seven days, heat has to be applied each week to maintain HSP72 levels in the muscle.

Raising body temperature enough to promote HSP72 synthesis is an easy process and according to Powers, "I don't see why these kinds of tests couldn't begin very soon. It's a safe and non-invasive way to treat muscle loss."

As part of the healing process the researchers are also studying mechanisms to slow protein mortification in muscles. This could then be used in conjunction with HSP72 to improve recovery times.

So while the most immediate application of this work might seem to be for speeding recovery from bones broken in sports injuries, it might be better applied to older people, whose bone injuries take much longer to heal. In many ageing Western populations, better treatment using this type of approach should lead to lower treatment costs but more importantly better quality of life where mobility and independence can be maintained. A recent Australian survey came up with an alarming statistic, that 75% of the 'older women' surveyed would prefer to be dead than lose their mobility due medical problems like hip fractures!