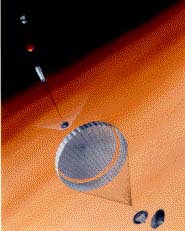 A global warning system for volcanic eruptions will soon be in place, following the weekend launch of a NASA Terra satellite from Vandenburg Airforce Base in California.

Researchers from the CSIRO in Australia will use a sensor on the satellite to monitor the surface of the earth, looking for 'hot spots' that may signal an active volcano.

"The sensor will scan the entire planet every one to two days," says Dr Fred Prata, from CSIRO Atmospheric Research. Dr Prata is a co-investigator on the NASA team that will use data from the instrument.

"We will be collecting information about the earth's surface at dozens of different wavelengths from the electromagnetic spectrum," says Dr Prata. "Until now, we haven't had sufficient information to be able to spot a volcano that is about to erupt," he says.

"Our objective is to provide timely alerts to local authorities when we spot high temperatures, known as 'thermal anomalies', produced by lava near the surface.

"We will also be able to warn pilots to keep clear of the area,' says Dr Prata."

Researchers will also be using the sensor, known as MODIS, to study the effects of eruptions on the atmosphere and on climate. They will be able to investigate the composition of particles and gases ejected into the air.

"The sensor will provide temperature readings throughout the atmosphere, assessments of cloud patterns and will enable us to track smoke plumes from biomass burning," says Dr Prata.

"MODIS (Moderate Resolution Imaging Spectroradiometer) has taken a decade to develop," he says.

Australian scientists will have daily access to NASA satellite data, which will be received at ground stations in Hobart, Alice Springs and Perth.

Working with NASA, CSIRO is using measurements from a site near Alice Springs to calibrate another sensor on board the NASA Terra satellite ? an advanced radiometer.

The radiometer will provide high-resolution data on land use and land cover, track natural disasters, and probe climate variability and hydrology. The radiometer, a result of calibration between the United States and Japan, will also aid in exploration for mineral deposits, petroleum and ground water.