Good for the diet but what does it taste like? 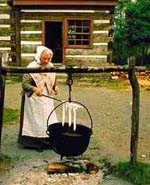 Can't believe its not butter? We it's not it's margarine and eating three servings a day of a 'margarine-like spread' containing a plant substance called stanol can apparently reduce cholesterol levels by as much as 10 percent.

These are the results of a multi-center study coordinated by the Mayo Clinic, which studies 300 people with mildly elevated cholesterol levels. The volunteers were placed in four groups, three of which ate margarines fortified with three different quantities of stanols) one group ate normal margarine).

Stanols are a plant product that inhibits the body's absorption of cholesterol.

The greatest reduction in the study ( 6% percent TC and 10 percent LDL-C) came from the group who ate the spread containing one gram of stanol.

So for all you who are worried about your cardiovascular systems, you can now rush out and buy margarine with stanol , but personally I'II stick to butter.