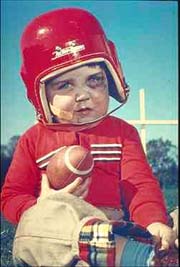 The image of ex-football players being big brain damaged dummies may be closer to the truth than players and coaches might like to admit.

A new study looking at the long-term effects of concussions on athletes', showed that college football players who sustain multiple concussions were at risk of a decline in long-term neuropsychological function (like memory, problem solving, speed of information processing and fine motor speed). What is even more alarming is that players with a pre-existing learning disability who suffer multiple concussions seem to have an even higher risk of permanent injury!

All sports have inherent risks for athletes, but the risk of head injury in contact sports like American Football, rugby and Australian Rules football is much greater.

"The chance that a college football player has had a concussion playing football, either before or during college is very high - about one in three," according to the study's lead author Michael Collins, Ph.D. "Our study revealed that more than two-thirds of quarterbacks and tightends had experienced at least one concussion, while one-third of running backs/fullbacks had a history of concussion."

Prior to the 97/98 and 98/99 seasons, players were interviewed about their medical history and were administered a 30-minute series of written and verbal neuropsychological tests to establish baseline readings. When a player subsequently sustained a concussion, he was again given the same tests. The post-concussion analysis indicated that:

Within 24 hours, athletes performance was noticeably worse in the areas of verbal learning, memory and speed of information processing.

Deficits in these areas were detected up to five days later.

According to Dr. Collins, "It is a misconception that concussion always results in a loss of consciousness. Many other symptoms exist including confusion, memory loss or slowed mental processing. We recommend that an athlete be free of all symptoms before returning to play. The tests administered in this study allow us to thoroughly measure brain function and make more informed decisions. For players who have sustained more than one concussion over their career, we need to be even more cautious because our study showed the damage can last years."

"We don't know whether concussions cause learning disability, or players with a learning disability are more vulnerable to sustaining concussions," Dr. Collins says. "But our study revealed a trend that warrants further investigation to see why these players are at risk of impaired neurological function."