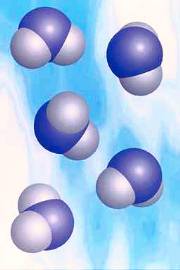 The resolution of focusing light microscopes has been traditionally limited by the wave nature of light. This limit was overcome by scientists at the Max Planck Institute for Biophysical Chemistry in Goettingen/Germany, by using two laser beams, in which one beam illuminated the sample while the second beam sculpted the fluorescence spot generated by the first (Optics Letters, 15 July 1999).

The resolving power of a light microscope is intimately connected with the smallest light spot that can be focused at a sample. In the 1870's, searching for better focusing, Ernst Abbe, then head of the company Carl-Zeiss and physics professor in Jena, found a law that fated the art in microscopy for the century to come. Due to its wave nature, he reasoned, light cannot be focused to a infinitely small spot for it will be blurred by diffraction. The smallest possible spot would be about a third of a wavelength in diameter, which is about 200 nm. Features closer than that should not be distinguishable.

In the subsequent quest for higher resolution, it seemed evident that focused light had to be abandoned. Hence, electron and scanning probe microscopes such as the atomic force and the near-field optical microscope were invented. In spite of their achieving a thousand times higher resolution, these microscopes could not really push aside the focusing microscope in biological research. The reason is that besides being detrimental in most cases, they are, at the end of the day, limited to the specimen surface. The focusing light microscope is the only way to allow the imaging of intact transparent specimens in three dimensions, especially when tagged with fluorescent dyes. Thus, it is indeed unfortunate that its resolution is hampered by diffraction.

In an Optics Letters paper, Thomas A. Klar and Stefan W. Hell of the Max Planck Institute for Biophysical Chemistry in Goettingen/Germany, now report they have beaten Abbe's limit in a focusing fluorescence microscope.

By turning on the stimulating beam we can switch from classical resolution down to sub-Abbe resolution" says Thomas Klar, a doctoral student in Stefan Hell's laboratory. Hell is pleased with this progress because his initial model predicts a resolution potential of the order of a few tens of nanometers. As the principle is applicable to any organic molecule, not only to the fluorescent ones, applications can be envisaged whenever the excited state is effective in a three or four level energy system. Future applications may well include spatially localized pump-probe spectroscopy and high resolution data storage. Once realized in a cell, this microscope would be fine enough as to literally shed new light on the relationship between structure and function of many cell organelles as well as on their three-dimensional architecture.