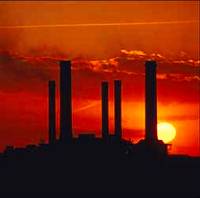 As levels of the greenhouse gas carbon dioxide rise, concentrations of oxygen in our air have fallen. CSIRO scientists in Australia have measured the decline in oxygen that has occurred during the past 20 years, the longest period over which such an assessment has been made.

'As fossil fuels burn, they generate carbon dioxide, using up oxygen in the process,' explains Mr Ray Langenfelds from CSIRO Atmospheric Research. 'About half of the carbon dioxide from fossil fuels remains in the atmosphere. The changes we are measuring represent just a tiny fraction of the total amount of oxygen in our air (20.95 per cent by volume). The oxygen reduction is just 0.03 per cent in the past 20 years and has no impact on our breathing,' says Mr Langenfelds.

'Typical oxygen fluctuations indoors or in city air would be far greater than this,' says Mr Langenfelds. However the oxygen measurements shed new light on the extent to which the world's forests and oceans share the task of absorbing half the carbon dioxide generated by burning of fossil fuels.

'While the oceans emerge as the slightly larger long-term sink, plants are clearly soaking up more carbon dioxide with time. If they weren't, levels of carbon dioxide would be far higher,' says Mr Langenfelds. Although deforestation during the past 20 years has released vast quantities of carbon dioxide, remaining plants are taking up much of this gas. As plants photosynthesise, they produce oxygen, explaining why the oxygen decline in air has been less than expected.

Mr Langenfelds has analysed air dating back to 1978 from CSIRO's unique 'archive' of pristine air collected at the remote Cape Grim Baseline Air Pollution Station operated by the CSIRO and Bureau of Meteorology in north-western Tasmania.