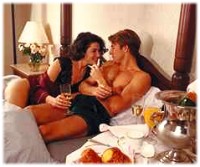 Many people throughout the world have long advocated the positive effects of regular sexual activity upon physical and mental health. Sex helps you to a healthier, happier and wiser life, they say. And now, according to a German magazine, you can add headache prevention to that growing list.

The weekly magazine Freundin said scientists have found that regular sex produces hormones including adrenaline and cortisol. These stimulate the brain, which in turn helps to prevent migraines. Details of the extent of experimentation engaged in by the scientists were not forthcoming.

"Sex promotes our ability to concentrate, lengthens our attention span, and stimulates creativity and ideas," said Werner Habermehl, a professor at the Sexology Institute in Hamburg. "In short, sex makes you smarter."

Habermehl explained that adrenaline and cortisol are produced during sexual activity.

Endorphins are released that have an effect similar to morphine and eliminate migraines.

This could mean that "Not tonight, I've got a headache" could become a call to action, rather than the traditional excuse.

"People who have regular sex are training their bodies physically and psychologically to be in top form," Habermehl said. "During sexual intercourse, our bodies manufacture a powerful hormone cocktail that has an immensely positive impact."