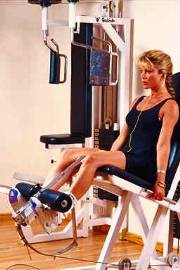 There are now more reasons than ever to get off the couch and to get moving. In addition to regular exercise promoting good health, a new review of psychological research shows that exercise is an effective but underused treatment for mild to moderate depression. The review, published in the June issue of Professional Psychology, also shows there is some evidence that regular exercise may help in the treatment of schizophrenia, alcohol dependence and as a singular treatment for some anxiety disorders and for people suffering from body image problems.

The authors reviewed studies since 1981 in which exercise was used as an intervention in treating individuals with the following clinically diagnosed psychiatric disorders: depression, anxiety, developmental disabilities, schizophrenia, psychosomatic disorders and substance abuse.

The review of research concludes that regular exercise is a viable, cost-effective treatment for mild to moderate depression and may be useful in the comprehensive treatment of more severe episodes of the disorder. Nonaerobic forms of exercise such as strength training are as effective as aerobic exercise in treating depression. The researchers also found that less strenuous forms of regular exercise, such as walking, may be sufficient to demonstrate significant treatment effects, however they note more research is needed to confirm this initial finding.

Other findings from the review include the following: Evidence that exercise is an effective short-term treatment for the reduction of disruptive behavior and for increasing work performance in some people with developmental disabilities.

Regular exercise appears to be a necessary ingredient in behavioral treatment programs that effectively reduce pain frequency and intensity in people with mild to moderate chronic pain Regular exercise is more effective than placebo pills, but not chlomipramine, in reducing symptoms of anxiety in patients with panic disorder.

Case studies suggest that regular exercise may be an important part of treatment programs for people with schizophrenia, although more research is needed to confirm that finding.

As for the role exercise may play in the treatment of alcohol dependence and smoking-cessation treatment programs, the evidence was inconclusive.

The researchers say there was some limited evidence that regular exercise may be an effective tool in the treatment for alcohol dependence, but more research is needed.

Considering the evidence that exercise is a viable, cost-effective treatment for depression and chronic pain, the researchers say they are somewhat surprised that it has not become a more popular treatment alternative and suggest that it be more commonly used as part of a therapist-structured treatment program.