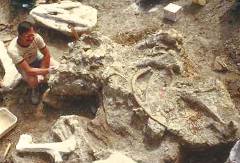 An international research team has found evidence of the earliest known modern tree. It was a plant that lived about 370 million years ago, but is now extinct.

The plant, called Archaeopteris, had the same structure of modern trees but it took millions of years for it to evolve into the form that we see being cut down today.

Until this find, botanists' descriptions of the first tree were based on fossilized leaves and bits of wood found in rocks.

In a report in the science journal Nature, Brigitte Meyer-Berthaud of the University of Montpellier in France and colleagues in the U.S. and Germany described how they found 150 fossilized examples of the extinct plant in various locations throughout Morocco.

"Here we describe the largest group of anatomically preserved Archaeopteris remains ever found...and provide the first evidence that, in terms of development and branching strategies, these 370-million-year-old plants were the earliest known trees,'' the report claimed.

The samples of the plant showed tree branching and big roots, which previously had only been conjecture. This demonstrated the similarity with the structure found in more modern trees.

"We had always thought that this was modern - but it turns out that the first wood trees on earth had this exact same design.''

The find was made while the team was studying marine deposits in the Morocco Sahara desert, where marine rock formations were being charted for many years. While looking for connecting formations at a depth that would be from the Devonian period, logs were found that had been buried in ancient marine sediment that would have been hundreds of miles off the ancient coastline but were now exposed by shifting desert sands. "In three days, we filled a truck," Scheckler says.

Some of the trees that Meyer-Berthaud, Scheckler and Jobst Wendt of the University of Tubingen in Germany found were up the 50 years old, making them the first long-lived perennial.

"Other plants ran out of the ability to grow,'' said Scheckler. "These trees could grow for 10-50 years or more. They had no apparent life span.''

The researchers added that before the plant became extinct it had had a major impact on ecosystems. It was the first plant to develop an extensive root system and had an impact on soil chemistry.