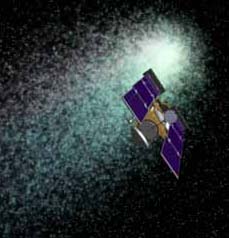 NASA Astronomers have recently discovered evidence that suggests a new type of black holes in spiral-shaped galaxies is present throughout the Universe. These mysterious classes of "middleweight" black holes, formed by an unknown process, are 100 to 10,000 times as massive as the Sun, yet each occupies less space than the Moon.

A black hole is a region of space with such a force of gravity is so powerful that nothing, not even light, can escape its pull. Until now, scientists knew about two types of black holes: stellar and supermassive. Stellar black holes are the remains of dead stars several times heavier than the Sun, compressed to a diameter of a few miles or less. Supermassive black holes have mind-boggling masses of one million to one billion Suns and may have formed in the early universe from giant gas clouds or from the collapse of clusters of immense numbers of stars. The astronomers identified the new class of black holes through X-ray light, the final cries of energy emitted from gas and particles spiraling into a black hole. The discovery will be announced today at the meeting of the High Energy Astrophysics Division of the American Astronomical Society in Charleston, SC.

Dr. Edward Colbert and Dr. Richard Mushotzky, astronomers at NASA's Goddard Space Flight Center, Greenbelt, MD, first saw hints of the new class of black holes while studying X-rays from 39 relatively nearby galaxies. Dr. Andrew Ptak and Dr. Richard Griffiths at Carnegie Mellon University studied X-ray light from a galaxy not included in Colbert and Mushotzky's set, galaxy M82. Both teams found unique X-ray light indicative of a new black hole class. The results from both teams will be published in the Astrophysical Journal and the Astrophysical Journal Letters, respectively.

"Our intent was to understand what was producing an unusual class of X-ray luminosities near the centers of many galaxies," said Colbert. "With data from the Einstein satellite from the 1970s, we couldn't determine whether they had features associated with supermassive black holes or stellar black holes. So we took a fresh look with newer data."