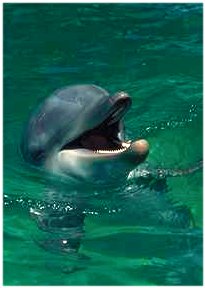 As part of a study funded by Texas Sea Grant, Texas A&M University toxicologist David Busbee analyzed tissue samples taken from the blubber of 10 of the dolphins that stranded in the winter of 1990. He tested them for a variety of pesticides and pollutants, including PCBs, and calculated the amounts and toxic equivalencies (TEQs) required for specific chemicals to prove dangerous to animals.

While many forms of 209 different PCBs were present at low levels, the dolphins carried an extremely toxic amount of a form known as non-ortho, coplanar PCBs. The non-ortho coplanar forms of PCBs are so toxic that even extremely small amounts can threaten animals. The TEQ levels he found were 200 times those known to cause birth defects in rats and developmental defects in birds.

"Some of these animals had, over their lifetimes, accumulated fairly large concentrations of these compounds," Busbee said.

No one had previously identified non-ortho PCB levels in the stranded dolphins because scientists do not routinely measure some of the very rare, but potentially toxic, forms when they study PCB levels. But even with this additional information, Busbee said, scientists still do not know exactly what killed the 10 dolphins.

"We think the cold weather and food scarcity put the animals in a lot of stress," he said. "Because they were stressed and using up their normal blubber reserves, they were releasing chemicals stored in the blubber, exposing themselves to extremely high levels of compounds."

This finding raises questions about whether people living near the bay or eating seafood are also accumulating high levels of potentially poisonous PCBs. Research suggests that humans may be even more vulnerable to PCBs and related chemicals than dolphins, Busbee said.

If present in stored fat, the toxic PCBs could pose a particular threat to women, especially those who are pregnant or nursing. Women draw on their fat reserves - where PCB compounds are stored - to produce milk, just like the dolphin.

"When a female dolphin is making milk, she's using up blubber," Busbee said. "As she uses up that blubber to make milk, all of those compounds that have been stored in the blubber get offloaded into the milk. These baby dolphins are being exposed to tremendously high levels of lipid-soluble compounds. This has been documented in a number of studies."

Busbee said that if the scientists are able to attribute the dolphins' cause of death to PCBs, their finding might also help explain the world's shrinking dolphin population, which in some places has fallen by 50 per cent in the past 10-15 years.

Viruses have killed off large numbers of the marine mammals, he said, but some scientists believe pollutants are more likely the underlying cause of those deaths. PCBs and other environmental pollutants suppress the immune system in animals, including humans, making it tougher for them to fight off infectious agents such as viruses and bacteria.

Scientists have already linked pollution to birth defects among seals - another marine mammal - in the heavily polluted Baltic Sea and other areas around the world, he said. Scientists would not necessarily observe these same defects among dolphins as the animals would die in infancy or be eaten by predators.

Pollute The Message Board?