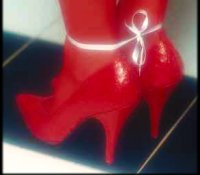 More than three-quarters of American women now wear low-heeled, sensible shoes at work, according to a survey revealed today by the American Orthopaedic Foot and Ankle Society (AOFAS). Furthermore, the higher the educational level completed by women, the lower the heel they wear in a fashion shoe.

The survey of 531 women who work outside the home reflected a continuation of the decade-long trend away from high heels. Forty-four per cent of respondents reported wearing "flats" (fashion shoes with heels less than 1 inch) at work, while 30 per cent wore athletic shoes and 17 per cent wore low pumps (less than 2-1/4 inches). Only 2 per cent of women reported regularly wearing shoes with a heel greater than 2-1/4 inches.

The AOFAS study results indicate that the higher the heel most commonly worn, the greater the percentage of foot problems reported. The highest percentages of bunions, calluses, neuromas and ingrown toenails were reported in women who most commonly wore a heel height over 2-1/4 inches.