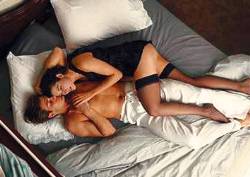 A new study by Carl J. Charnetski, professor of psychology, and Francis X. Brennan, Jr., assistant professor of psychology, at Wilkes University, suggests that the immune system is boosted by frequent sexual activity. Their research, "The Effect of Sexual Behavior on Immune System Function," is being presented at the Eastern Psychological Association Convention in April.

The bad news for people hoping to have discovered a new way to prevent the common cold is that the researchers found that individuals engaging in very frequent sexual activity - more than two times a week - had significantly lower levels of IgA than those individuals reporting sexual activity once or twice a week.

"We also found no direct relationship between IgA and either length of relationship or sexual satisfaction," says Brennan.

The researchers collected data on 111 undergraduate students - 44 male and 67 female - regarding the frequency of sexual encounters as defined by some form of genital contact with a partner. Information was gathered from the volunteers on length of relationship as well as satisfaction with one's sexual relationships.

Charnetski and Brennan then took a measure of immune system function from each individual. Saliva samples were obtained and bio-assayed for Immunoglobulin A (IgA). IgA is the most prevalent of the five major antibodies present in one's system. It is found in all mucosal linings of the body as well as the blood system.

IgA is an antibody produced by B lymphocytes and it forms a barrier against the entrance of disease, says Brennan Measuring IgA provides some information as to general immune system function. Secondly, IgA is found in all muscosa and provides a first line of defense against upper respiratory infection.

"This is one way of marking immunologic defense at any point in time and simply stated, more is better," says Charnetski.

"We found concentrations of IgA to be approximately one-third higher in the Frequent group as compared to all other categories, including the Very Frequent group," says Charnetski.

The professors plan on attempting to identify specific mechanisms whereby sexual activity influences IgA in future studies. They are already in the process of analyzing data involving "Love" and IgA and how this may interact with their current research findings.