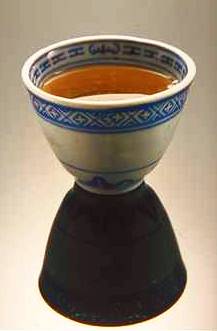 Purdue University researchers Dorothy Morre and D. James Morre found that EGCg, a compound in green tea, inhibits an enzyme required for cancer cell growth and can kill cultured cancer cells with no ill effect on healthy cells. The findings offer the first scientific evidence to explain precisely how this compound works within a cell to ward off cancer. The results were presented this month at the 38th annual meeting of the American Society for Cell Biology in San Francisco.

"Our research shows that green tea leaves are rich in this anti-cancer compound, with concentrations high enough to induce anti-cancer effects in the body," says Dorothy Morre, professor of foods and nutrition at Purdue.

The findings suggest that drinking more than four cups of green tea a day could provide enough of the active compound to slow and prevent the growth of cancer cells, she says.

Although all teas come from the same botanical source, green tea differs from black tea or other teas because of the way the tea leaves are processed after they are picked. For black tea, freshly picked leaves are "withered" indoors and allowed to oxidize. With green tea, the leaves are not oxidized, but are steamed and parched to better preserve the natural active substances of the leaf.

Morre and her husband, who is the Dow Distinguished Professor of Medicinal Chemistry and Molecular Pharmacology at Purdue, show in their study how green tea interacts with an enzyme on the surface of many types of cancer cells including breast, prostate, colon and neuroblastoma. This enzyme, called quinol oxidase, or NOX, helps carry out several functions on the cell surface and is required for growth in both normal and cancerous cells.

"Normal cells express the NOX enzyme only when they are dividing in response to growth hormone signals," Dorothy Morre says. "In contrast, cancer cells have somehow gained the ability to express NOX activity at all times." This overactive form of NOX, known as tNOX - for tumor-associated NOX - has long been assumed to be vital for the growth of cancer cells, because drugs that inhibit tNOX activity also block tumor cell growth in culture.

After hearing a researcher discuss green tea's anti-cancer potential on a television show, the couple set out to investigate whether tea infusions -- made when the compounds of tea leaves leach into hot water -- would have an effect on tNOX enzyme activity.

In studies of cultured cells and isolated membranes of cells, they found that black tea could inhibit tNOX activity at dilutions of one part tea to 100 parts of water.

The green tea infusions, however, were 10 to 100 times more potent, inhibiting the activity of tNOX at dilutions ranging from one part tea per 1,000 to 10,000 parts water.

"This finding suggested that green tea leaves are rich in a compound that inhibits tNOX," Dorothy Morre says. "With concentrations of the active compound at these levels, drinking several cups of green tea per day might inhibit the growth of cancer cells in the body."

To determine what the active compound was, Morre and her husband tested a number of compounds found in tea, including epigallocatechin gallate, or EGCg, a primary component of green tea that has been linked to anti-cancer effects.

Their studies, done with cultured cells and with purified NOX protein in solutions, found that EGCg was capable of inhibiting the tNOX activity of cancer cells at low doses - such as those that could be derived from drinking several cups of green tea per day - but did not inhibit the NOX activity of healthy cells.

"This is one of the first studies to directly link the EGCg in green tea to anti-cancer activity," Dorothy Morre says. "In the presence of EGCg, the cancer cells literally failed to grow or enlarge after division. Then, presumably because they did not reach the minimum size needed to divide, they underwent programmed cell death, or apoptosis."