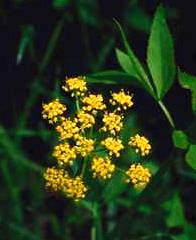 The idea of co-evolution is not new, but it is far from universally accepted. In 1964, Paul R. Ehrlich, now president of Stanford University's Center for Conservation Biology, and Peter H. Raven, now director of the Missouri Botanical Garden and botany professor at Washington University in St. Louis, founded the study of co-evolution. They defined it as the process of reciprocal evolutionary change in interacting species.

They noted that plants produce chemicals that are toxic to insects, and that insects produce mechanisms to detoxify many plant defenses. However, while most scientists accept the notion that insects must adapt to their host plants, some have debated whether plants tailor their toxins specifically against insects.

With the help of museum specimens of parsnip plants, including some that predate the webworms' post-1900 entry into the Midwest, University of Illinois entomologists May R. Berenbaum and Arthur R. Zangerl say they have strong evidence for both sides of the adaptation scenario. Their findings were published in the Nov. 10 issue of the Proceedings of the National Academy of Sciences.

Today's webworms and parsnips in Minnesota and in northern and central Illinois have adapted to each other, the scientists report. Webworms feed on the reproductive structures of parsnips, so resistance to the insect is vital to parsnip survival. At each site, levels in the plants of four defensive compounds, called furanocoumarins, match remarkably to the levels of detoxification enzymes in the insects.

"If 30 per cent of the plants have a particular chemical phenotype, then roughly 30 per cent of the insects have the phenotype that permits them to live on those plants," Zangerl said. "You see quite a balancing act. This occurred to a remarkable degree in three of the four populations that we observed."

To strengthen their case, the researchers examined pre-1900 museum specimens kept by the U. of I. Herbarium. They found that the furanocoumarin compound sphondin - produced in high levels in today's parsnips - was produced in low quantities or not at all in the museum specimens. It is sphondin, they found, that the webworms have a hard time metabolizing.

"They have no genetic variation to be able to metabolize it," Berenbaum said. "People have a hard time accepting the idea that plant traits represent a response to insect-caused damage. They assume that insects are minor annoyances to plants, like fleas on a dog, rather than major selective forces. We feel our data say that the evolutionary responses are reciprocal between these interacting species. This work also indicates how quickly plants can respond genetically to insect-caused damage."