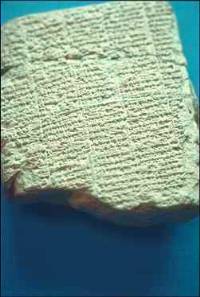 According to Christopher Densmore, archivist at the University at Buffalo, the explosion in information technologies in the late 20th century will make it one of the worst-documented periods in history. The problem, he says, is that the preservation of information produced and stored in digital form is far more difficult, time-consuming and expensive than it is to save documents on paper and microfiche. Continuing improvements in electronic media of all kinds have provoked legal, organizational and financial nightmares for archivists, librarians, museums and other information administrators.

Citing a 1996 report on online electronic documents and distributed databases produced by the SUNY Office of Archives and Records Management, Densmore notes that electronic information systems are not inherently designed to serve as record-keeping systems in the archival sense of that term.

"No one knows how stable electronic files are or how long they'll last," he says. "Right now, the average book published on acid-free paper by university presses and stored in a library is expected to remain useable for 500 years. That's the archival standard for paper documents, photographs and microfilm. So material stored today in those formats will be available to our progeny in the year 2498.

"Contrast this with the stuff of floppies, which, with great care, might last until 2028 and, without care, only 10 years, or until 2008. Optical disks might survive intact until 2058," he says. "No one really knows for sure."

"Already, information produced by now-defunct software on retired hardware can't be read by today's computers," he says. "And it is very difficult to find an old computer that can read it for several reasons. Not only may the document be readable only by a specific generation of old computer, but by vintage software that may not be available any more."

Even more difficult to deal with is the electronic manipulation of photographs that are then used to "document" an activity or person in a more attractive form.

"The result may be more appealing visually," Densmore admits, "but if you go around straightening or whitening teeth, moving trees around, changing hair color or adding characters to a scenario, altering bodies to conform to current standards of attractiveness, then you are no longer documenting fact, but producing an aesthetic, but inaccurate, document that may not reflect reality at all. That's fine for advertising, I suppose, but historians trying to keep a record need to know how accurate these things are."

The new issues that confront archivists are perplexing and difficult to resolve. The question of whether libraries should maintain a collection of equipment and operating systems that can read old electronic materials remains unanswered. "It is an expensive and enormously complex task to maintain old hardware and software. It is also expensive to regularly migrate vast bodies of software to new generations of technology and impossible to maintain the depth of reference of hypertext originals," says Densmore.