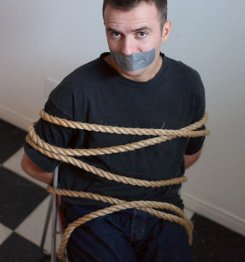 In research which may effect the media buying habits of television advertisers, Dr. Brad J. Bushman, of Iowa State University, said that watching violent television programs can impair a person's ability to remember what is being advertised during the commercials.

In one experiment, Bushman tested the ability of 200 students (100 male and 100 female) to recall the brand names of items from two commercials after watching a violent or nonviolent film clip. Both types of film clips did not differ in pre-test measures of self-reported arousal (exciting, boring and/or arousing) and measures of physiological arousal (blood pressure and heart rate). Those who watched the violent clips recalled fewer brand names and commercial message details than did those who watched the nonviolent clips. "Violent programming seems to impair memory for commercial messages even when the level of program arousal is controlled," said Bushman

In a second experiment, 200 students (100 men and 100 women) were tested on brand recall, commercial message details and visual recognition of the brand marketed in the commercial. "These students were also given a distracter task where they had to recall other brands immediately after watching a violent or nonviolent video. The results match those of the first experiment. Those watching the violent videotape did poorer on recalling the brands, remembering the commercial messages and visually recognizing the brands from the slides," said Bushman

In a final experiment, the subjects reported their moods after watching four videotapes to determine whether anger obstructed their ability to remember the content of the commercials. After viewing either violent or nonviolent videotapes, the students completed a mood form that assessed their anger and positive emotions (alertness, determination and enthusiasm).

The results of the study are reported in the December issue of the Journal of Experimental Psychology. "I can say," concluded Bushman, "that the negative effects of television violence on memory for commercial messages can be partly due to the anger induced by the violent content. This is not good for advertisers because in the time they hope viewers are absorbing their commercial messages, viewers may actually be trying to calm their anger brought on by what they just watched."

You Talkin' To Me?