Pennies Off The Menu For Kids 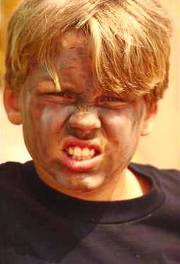 When a child swallows a penny, it can react with stomach acid to create a toxic mixture as corrosive as car battery acid, leading to severe stomach inflammation and even ulcers, physicians at Duke University Medical Center have discovered. The research findings show that the surprisingly common problem of ingested coins can pose a serious threat to children and pets.

Statistics from the Consumer Products Safety Commission indicate that more than 21 000 children made trips to the emergency room after swallowing coins in 1997.

Dr. Sara O'Hara, a pediatric radiologist, conducted the research after a 2 year-old boy was brought to Duke with an upset stomach. When doctors x-rayed the child's stomach, they discovered a small disc full of holes, which they assumed was a toy part or small battery. However, when doctors removed the object with an endoscope, they discovered that the object was a 1989 penny the child had swallowed four days earlier. In addition, the child had developed a stomach ulcer in the area where the penny had lodged.

"We were surprised to find that the object we saw on the x-ray was a penny because it had holes in it," said O'Hara. "Kids ingest coins all the time and they usually pass through the stomach and intestinal tract without incident. So we wanted to investigate what happened."

The researchers conducted a series of experiments in which they bathed pennies in a solution of stomach acid (hydrochloric acid). Pennies minted before 1982, which are 95 per cent copper and 5 per cent zinc, showed no erosion. However, those minted after 1982, which are nearly all zinc, with a thin copper plating, began eroding immediately. By the second day, they had holes in them. The researchers found the zinc in the coins reacted with the acid to form hydrogen gas and zinc chloride. The reaction, similar to the chemical process that occurs in car batteries, can erode the stomach lining, causing an ulcer.

When zinc is absorbed into the body in high enough doses, it can cause problems ranging from stomach ulcers to kidney, liver and bone marrow damage. O'Hara recommends that parents wait a day or two when they know their child or pet has swallowed a penny and check the stool to see if the coin emerges. If the child starts having stomach pain or vomiting, take the child to an emergency room.