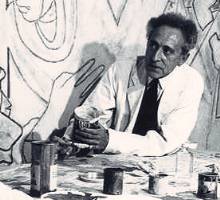 Researchers led by a University of California San Francisco neurologist have determined that a relatively rare form of dementia brings out startling artistic talents in some people, and that these abilities evolve and flourish even as patients lose the ability to remember such basic words as "art."

"The last place one would expect to find any aptitude flourishing, let alone emerging, is in the brain of someone slowly wasting away with dementia, but the evidence is pretty dramatic," said Bruce L. Miller, director of the UCSF Alzheimer's disease center.

"In each of the five cases we've documented, a period of exceptional creativity heralded the beginnings of a tragic disease and continued to flourish even as the patients began to lose their ability to use language.

"Studying these patients," said Miller, "may help researchers learn where and how visual and musical abilities develop in the brain."

Frontotemporal dementia accounts for roughly 10 per cent of dementia cases, frequently runs in families, and tends to manifest itself when people are in their 50s. The cause of the familial form of the illness was recently discovered to be a mutation in a gene called tau. Frontotemporal dementia affects different anatomic regions and causes different chemical deficits than Alzheimer's disease and other dementias.

The disease affects an area of the brain that influences social behaviors, causing a loss of social skills and disinhibition. The small subset of patients who developed artistic talent became anti-social, were directed internally, showed little interest in the teachings of others and tended to work on their art zealously.

Miller and his co-authors at UC Los Angeles see a possible parallel between these patients and such artists as Van Gogh and Goya, who both spurned social conventions, worked independently and with extraordinary focus, and battled mental illness.

"The loss of social skills and inhibitions may have facilitated the art of our patients," Miller said, "allowing for previously untapped aptitudes to emerge."

The five patients examined in the study became visual artists, and all worked zealously for several years before deteriorating into the final stages of mental decline. In one case, a mild mannered stockbroker with no prior interest in art shunned his conservative attire in favor of brash, bold fabrics, and began painting with passion, winning awards at local art shows even as his social and language skills eroded.

A 53-year-old man with a tenth-grade education and no prior interest in art entered a period of intense artistic activity, initially drawing vases and bridges, ultimately painting churches and haciendas remembered from his childhood. A 51-year-old housewife without previous artistic training began painting rivers, ponds and rural scenes recalled from her childhood, while a 57-year old man who had developed a successful advertising agency began traveling to remote areas of Central America, often putting himself in harms way to photograph buildings and people, working from multiple angles to achieve the "perfect" image.

In a previous study, Miller reported patients who exhibited other than strictly visual talents. One man with no musical background began composing quartets. Another invented a chemical detector and received a patent for it while he could name only one of 15 common objects on a word retrieval test. A man who could no longer speak designed sprinklers at his home.

The artistry that emerged in the patients observed was probably fueled by a mix of talents, experiences and brain circuitry unique to the individuals, said Miller. However, he said, the more fundamental explanation for the emergence of the talent most likely lies in the way in which the disease affected and spared different subsets of the patients' brain cells--and the way in which the brain's system of excitatory and inhibitory circuits respond to one another in the face of cell damage; when one circuit is stimulated, others are turned off.

The researchers suspect that in the case of the patients they studied, as well as others, degeneration in one part of the brain leads to enhanced function in another area, in this instance causing heightened activity in visual and musical areas of the brain. The intact frontal lobes, responsible for complex thought and planning, allow patients to plan and execute their visual and musical talents.

"It's not a concept in dementia that something could be getting better," said Miller. "We never think about the strengths of patients. We only think of the weaknesses. Now I always ask if there is anything patients are doing very well, or better than before."