Calling All Racist, Self-Hating Sexists. Yes, We Mean You 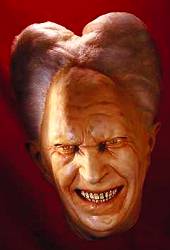 Prejudice is pervasive, affecting 95 per cent of people, according to the results of a new study. And to back up their findings the researchers have put the test on the web so that punters can assess their own unconscious levels of race and age prejudice, gender stereotyping and self-esteem.

The test is called the Implicit Association Test and was created by University of Washington psychology professor Anthony Greenwald, who is working with Mahzarin Banaji, professor of psychology at Yale University, to further develop the test.

"The test has the potential to reveal things about people that they may prefer not to know," explained Greenwald, who developed it with funding from the National Science Foundation and National Institute of Mental Health.

The test measures implicit or unconscious evaluations and beliefs that spring from strong, automatic associations of which people may be unaware, she said.

In experiments and demonstrations, the test has been used to show the unconscious roots of prejudice toward a variety of racial, ethnic and religious groups, as well as to illuminate automatic gender and age discrimination. Among other tests, it has been used to demonstrate automatic components of attitudes of whites towards blacks, Germans toward Turks, Poles toward Germans, Australians toward aboriginals and young toward old.

At a news conference, Greenwald and Banaji used the test to demonstrate the prevalence and strength of Americans' automatic racial preference for white over black. Participants in the demonstration were first asked to rapidly classify (by tapping their left or right knee) each of a list of names (shown on a projector screen) into those that are most often considered black (such as Malik and Lashonda) and those that are most often seen as white (such as Tiffany and Peter). Next they were asked to rapidly classify each of a list of words as pleasant in meaning (such as love and baby) or unpleasant (such as war and vomit).

The remarkable result was that it took about twice as long to respond to the second task, even though objectively the tasks were of equal difficulty.

The greater difficulty of giving the same response to black names and pleasant words provides a measure of automatic preference for the white names, Banaji explained. This effect -- the speed difference between the two tasks -- is so large that University of British Columbia psychology professor Eric Eich, a participant at an earlier demonstration, described it as "measurable with a sundial."

Banaji and Greenwald think unconscious prejudice may occur despite people's wishes and results from the culture they live in and the culture's attitudes towards stigmatized groups. "A culture leaves an imprint on the mental structure, and most people have more or less the same mental imprint," Greenwald said.

While Banaji and Greenwald admitted being surprised and troubled by their own test results, they believe the test ultimately can have a positive effect, despite its initial negative impact. "The same test that reveals these roots of prejudice has the potential to let people learn more about and perhaps overcome these disturbing inclinations," Banaji said.