Coughin', Coffin. Thanks To "Ebola With Wings" 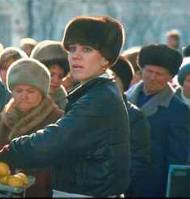 In what must be the scariest press release of the week, three organisations have issued a joint statement about the need for international attention and support to combat the epidemic of multi drug-resistant tuberculosis (MDR-TB) in Russia, which they claim could become a global epidemic.

The Public Health Research Institute (PHRI), Doctors Without Borders (Medicins sans Frontiers) and the Medical Emergency Relief Network International (MERLIN) are referring to the disease as 'Ebola with Wings' and calling for $100 million in funding to fight its spread.

MDR-TB evolves through inadequate treatment of ordinary TB. Like ordinary TB, the deadly new strain is spread through the air.

The joint statement says that the Russian economic crisis will further deplete the already strained resources of public medicine and the resulting shortage of anti-TB drugs will inevitably lead to the practice of substandard antibiotic treatment for patients with TB, which is the principal cause of MDR-TB. Standard treatment of regular TB consists of a daily regimen of four different antibiotics for six months.

When this treatment is incomplete or interrupted, a patient can easily develop MDR-TB and then spread this potentially lethal form of TB to other people.

Of particular concern is the dire situation in Russian prisons, where systematic underfunding combined with epidemic-prone conditions has already resulted in the generation of nearly 20 000 MDR-TB cases. The number of cases is expected to rise dramatically as 100 000 inmates with regular TB are subjected to inappropriate, MDR-causing treatment protocols.

Among the civilian population, TB patients undergoing treatment are often required to pay for their own drugs, even in state run hospitals. With the worsening economic situation, the burden on patients will likely translate into inadequate treatment and thousands of new MDR-TB cases.

The joint statement concludes that Russia alone will not have the resources required to cope with the problem, possibly leading to a global epidemic if not addressed immediately.