Let That Snake Bite You 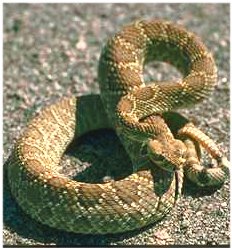 A protein found in copperhead snake venom dramatically retards breast tumor growth by both blocking tumor cell adhesion and invasion, as well as inhibiting new blood vessel development in the tumors, according to a research report presented here today at the national meeting of the American Chemical Society.

Tumors need blood vessels to deliver nutrients necessary for their continued growth, says Francis Markland, Ph.D., a professor of biochemistry at the University of Southern California School of Medicine, who reported the findings to colleagues attending this week-long meeting of the world's largest scientific society.

In studies with mice implanted with human breast cancer cells, Markland's research group found a 60 - 70 percent reduction in the growth rate of the breast tumors and a 90 percent reduction of tumor metastasis to the lungs of animals treated with the protein contortrostatin (CN), purified from the venom of the southern copperhead.

"Metastasis is a significant problem with breast cancer," Markland says. When first diagnosed with breast cancer, he says, the majority of women already have metastatic disease, which means the cancer has spread to another site such as the lymph nodes, brain, bone or other part of the body.

CN belongs to a class of proteins known as disintegrins, called that because they disrupt the function of certain other proteins, called integrins, on the surface of cells. Integrins are involved in the adhesive phenomenon of cells. CN is effective in retarding the spread of tumor cells because it inhibits their adhesion to and invasion of normal cells in the surrounding tissue. Preliminary studies done by Markland's group have shown that CN also can inhibit growth of other types of cancers.

Markland's research, supported in part by a California sales tax on tobacco products, indicates that CN is cytostatic rather than cytotoxic. In other words, CN does not kill the tumor cells, but instead puts them in a "suspended state of animation," which, he says, can be maintained for a long period of time.

This also has the advantage of eliminating the potential side effects of cytotoxic (cell killing) drugs. Like other antiangiogenic therapies, CN would need to be periodically administered over a period of time, according to Markland, in hopes of shrinking the tumor to a size where treatment could be scaled back or stopped.

Clinical trials using CN to treat breast cancer in women could start in "the not too far distant future," Markland says.