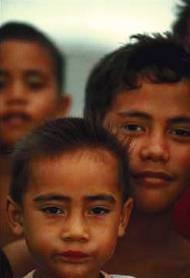 Research carried out over an 8 year period indicates that taller than average toddlers will be more aggressive at age 11, and more likely to resort to violence in adulthood.

"Three-year-olds - male or female - who average just half an inch taller than their peers tend to be more aggressive than normal when they reach age 11," says Adrian Raine, lead author of the study. "There appears to be a critical period in development - sometime after age 3 but before age 11 - when a child learns to use his physical advantage to aggressive ends. Parents of tall toddlers - especially those who are very stimulation seeking and fearless - need to take extra care to drive home the message that there are a lot better ways than physical force to get what you want in life."

Raine, a clinical neuroscientist at the University of Southern California, led a team of researchers who measured the height and weight of 1,130 male and female three- year-olds in Mauritius, a racially mixed island nation in the Indian Ocean off the coast of Africa. The island's low emigration rate facilitated the researchers' ability to track the toddlers as they aged.

While toddlers, the children were ranked on several stimulation-seeking scales, including a four-point scale that tested their willingness to explore toys independently of their mother in a laboratory setting: 1) passively clings to mother; 2) shows interest in toys but stays close to mother; 3) leaves mother to explore toys but returns to mother; and 4) actively explores toys without returning to mother.

The researchers used several fearlessness scales, including a five-point scale - ranging from 1 (representing no crying) to 5 (representing uncontrollable crying) - to gauge how fearful the toddlers were while undergoing testing for physiological arousal.

When the children reached age 11, their mothers answered questionnaires to measure the youths' aggressiveness ("fights," "is cruel," "swears" and "threatens"). Youths ranked by their mothers in the highest 15th percentile on an aggression scale were found to have stood, as toddlers, an average of one-half inch above their peers.

Raine believes a male hormone may play some role. "We know that people who are taller have higher testosterone levels," he explains, "so tallness in toddlers may be a marker for increased testosterone. Although the findings are debated, quite a number of studies have shown that violent offenders are higher than normal in testosterone."

Social learning theory suggests a further explanation. "A big toddler eventually learns that he can use force to get what he wants from other kids," Raine says. "So by the time the child reaches 11, aggressive behavior is ingrained - whether he still is taller than his peers or not."