Your Boss Is Clueless 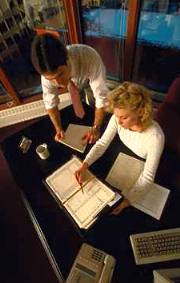 The results of a new study published in the Journal Of Management Studies confirm what many of us have suspected for ages - our superiors make bad decisions. And it's not just private firms that suffer from hapless decision-making, government departments and non-profit organizations feature in the research as well.

Researcher Paul Nutt, of Ohio State's Fisher College of Business, carried out the research by examining 376 business decisions and then interviewing the decision-makers involved. Decisions included buying a new computer, launching a new product, and modifying an employee bonus policy. Decisions were considered completely successful if they were adopted and continued to be used for two years.

From the interviews, Nutt identified four decision-implementation techniques: intervention, participation, persuasion and edict. In general, intervention and participation were the most successful techniques - but they were also the least used.

"Managers would be more successful if they used better tactics to implement their decisions," said Nutt, a professor of management science at Fisher College. "The problem is that the best tactics take time to implement and many managers are looking for quick fixes. However, poor decision making costs more time in the long run."

"Intervention is a subtle approach, but its record is so strikingly successful that it merits wider use," Nutt said.

However, it takes some time to properly use the intervention approach, which Nutt says explains why it was used in only 8 per cent of the decisions by top managers.

"Everybody has heard of participation, but hardly anyone really uses it in making decisions," Nutt said. "When it is used, it tends to be a token effort, involving just a few people, that is not effective."

Nutt also examined the decisions based on how much opposition they initially galvanized within an organization and how much the decisions would disrupt the organization. Results showed that intervention and participation remained the most successful tactics, regardless of the levels of opposition or disruptiveness.