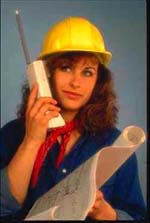 What effect does microwave radiation have on humans? 90% of the population of the Western Hemisphere seem glued to their mobile phone ('cellular' to our valued US readers), users should perhaps look at new research from the University of Warwick physicist Gerard Hyland that has raised new concerns about the effect of electromagnetic radiation on humans.

Dr Hyland looked at how biological systems, including humans, emit photons (low intensity radiation). According to Dr Hyland these photons are not random and can be viewed as the external sign of a properly functioning metabolism.

If correct, the impact on living tissue of external sources of radiation like microwave ovens and mobile telephones could be significant. How do you like your brain cooked? Past studies about external radiation have focused on thermal or heating effects, but little is known about non-thermal effects on humans.

In Russia where there has been wider study of biophysics, manufacturers of microwave emitting devices face far more stringent safety precautions than in the USA and UK. Indeed the body of scientific knowledge in China and Russia is so far in advance that physicians are already providing electromagnetic acupuncture for patients using microwave radiation.

Of course in Russia they could perhaps have concentrated a little more on the safey aspects of radiation emissions from nuclear reactors, weapon programmes etc than on the health consequences of heating up a plate of bortsch.