Something New About Alzheimer's But I Forgot What It Was 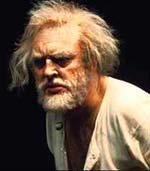 Most people think that the main problems with Alzheimer's Disease is patients forgetfulness. Not so, according to Anton Porsteinsson and Pierre Tariot, psychiatrists from the University of Rochester in a paper they presented to the 6th International Conference on Related Disorders in Amsterdam.

According to their research, patient agitation and related aggression are the top concerns of carers and families and is one of the main causes of institutionalization. They ran placebo-controlled studies on patients at the Monroe County hospital to assess the efficacy of epilepsy drugs in reducing patient agitation.

"This is a case where medical science is trying to catch up with clinical practice," says Porsteinsson. During the trial doctors noticed that patients who were less agitated and aggressive required less management (a significant cost in the nursing costs for institutionalized patients).

The trials, which were sponsored by the American Alzheimer's Association and National Institutes of Health are now being expanded.