Deadly Cosmic Rays That Both Destroy And Create 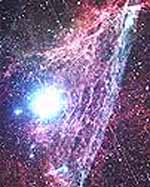 Forget asteroids, volcanoes or rising sea levels. What really wiped out the dinosaurs were jets of cosmic death rays flung out from colliding stars. That is the theory first proposed by three astrophysicists from the Technion-Israel Institute of Technology, who are now suggesting that the radiation produced from such a bombardment would also have resulted in the abrupt repopulation of the Earth with completely new species.

Arnon Dar, Ari Laor and Nir Shaviv propose their "doom and creation" theory in the latest issue of Physical Review Letters. Colliding neutron stars could have flooded the earth with lethal doses of muons, decimating the dinosaurs within a matter of days, they say. Radiation, meanwhile, would have caused mutations in surviving life, creating a whole new assortment of creatures on Earth.

The theory might also explain why radiation-resistant species, including many insects and plants, survived when other life forms were wiped out en mass. It also explains why species sheltered from the mouns in canyons, caves and deep under the sea were not destroyed.

Astronomers have identified five pairs of neutron stars in our galaxy, two of which are dangerously close to Earth. Should they collide, we could expect a month-long bombardment of fast-moving mouns. Aside from destroying our central nervous systems (leading to a slow and painful death), resulting chemical compounds would deplete the Earth's ozone layer and increase the amount of deadly ultraviolet light that reaches the surface. Luckily, no collisions are predicted for several hundred million years.