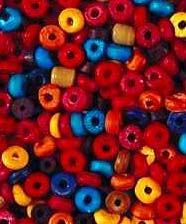 The origins of "modern" behaviour may be traced back more than 40,000 years to Africa, judging by excavations from the Enkapune Ya Muto rock shelter in the central Rift Valley of Kenya. According to Stanley Ambrose, a professor at the University of Illinois, there is also mounting evidence that by that time our predecessors sealed social alliances and prevailed over others by giving token gifts such as beads.

Ambrose, an expert on stone tools, palaeoecology and stable isotope biogeochemistry, has found that the site "contains perhaps the earliest example of what we think of as an Upper Palaeolithic stone-tool technology, and then later in time, ostrich eggshell-bead technology - the earliest evidence for ornamentation, which may imply a new kind of adaptive social system."

Findings among the oldest layers include "possibly the oldest example of Later Stone Age or European equivalent Upper Palaeolithic stone tool technology", as well as beads dated by radiocarbon to about 40,000 years ago. Ornaments such as these are generally deemed to be important evidence for "modern" human behaviour.

Human adaptability to risky environments, says Amrose, involves "being able to have relationships with people that you can rely on when resources in your area fail. The ancient beads may thus symbolize a mechanism for increased social solidarity and adaptations to risky environments. They may be a symbolic currency for exchange and obligations that can be saved for times of need - like money in the bank.

"People who have this social security system would compete better with others - the Neanderthals, for example - who didn't. So, this improved system of regional networks of social solidarity may have allowed modern humans, when they left Africa, to outcompete and replace the Neanderthals."