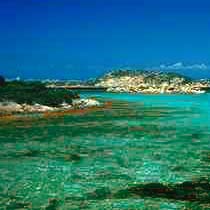 English and German soccer hooligans are not Europe's only dangerous "scum". They now come a close second to Caulerpa taxifolia - a highly aggressive species of algae currently decimating the Mediterranean. In the US it has already been found in a Hawaiian aquarium, and with no restrictions on the aquarium trade, danger signals are starting to flash in Washington.

"We need to call attention on a national level ... that this plant should not be imported," says the Smithsonian's James Norris. "We definitely don't want it in Florida, the Gulf of Mexico, or anywhere else."

First seen in Monaco in 1984, the infestation of Caulerpa taxifolia now stretches across Europe from the Croatian Adriatic to Sicily, Majorca and France.

A mollusc, which is a natural predator of Caulerpa taxifolia, is currently being trialled to control the European outbreak. However it has a distinct drawback in that it only devours the algae at a snail's pace.

In the meantime scientists are trying to spur various governments and regulatory bodies around the world to take the threat of Caulerpa taxifolia seriously. But their efforts might be a little too late if the experience in Europe is anything to go by.