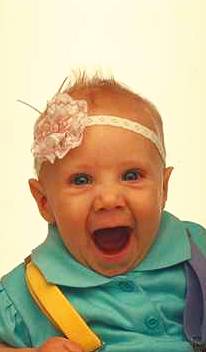 Are children "born to speak"? No one really knows, but new research suggests toddlers are sensitive to grammar at an astonishingly young age. According to LouAnn Gerken, an associate professor in the University of Arizona department of speech and hearing sciences, very young children respond to "grammatical morphemes" - articles like "the" or verb inflections such as "-ing" - to decide whether words are verbs or nouns, even though they themselves neglect such parts of language when first starting to talk.

"That's interesting for two reasons," says Gerken. "First, kids don't say those things in their earliest language productions. Two, grammatical morphemes are probably the most important aspects of language, signalling what a noun is or what a verb is. Nouns are things that have 'the' and 'a' in front of them, and verbs are things that have '-ing' and '-ed' after them. So if kids don't notice those things, then it would be hard for them to figure out other aspects of language. Grammatical morphemes are an important anchor into language."

In the first study of its kind, Gerken found that two-year-olds (who didn't themselves use grammatical morphemes in their baby talk) were more likely to select the right picture when prompted with sentences containing correct morphemes. 85 per cent of toddlers responded flawlessly to "Find the dog for me", whereas the sentences "Find was dog for me" and "Find gub dog for me" elicited a 55 per cent and 40 per cent correct response rate respectively.

Gerken and her colleagues then proceeded to attach electrodes to the scalps of 11- and 12-month-olds and read them a story book. Replacing grammatical morphemes with nonsensical syllables stimulated a different pattern of brain response from correct readings, suggesting that the toddlers were well aware of the difference.

According to earlier research, young children may omit grammatical morphemes because of the constraints of speech production. Concludes Gerken: "These data effectively rule out the idea that children's omissions of grammatical morphemes reflect the use of a less powerful language system than seen in adults. In other words, we are free to consider the possibility that infants and children are prepared to entertain a fully powerful system from the beginning."