"Nearby" Galaxy Clusters Break All The Rules 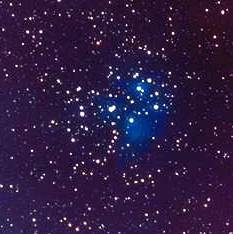 "Nearby" galaxy clusters - groups of a thousand or so galaxies about 3 million light years across - may be the cosmic equivalent of young mothers, according to astronomers at Northwestern University. Contrary to conventional theory, these pot-bellied clusters (with a mass about 10 000 times that of our Milky Way) may be birthing out new stars even as we speak, fashioning them from galactic dust and gas.

Until now. Focusing on three clusters a mere 2 billion light years away, Ulmer and his team were shocked by what they saw: "young" clusters spawning hot, young stars. Intriguingly, one of the three is said to be the bluest galaxy cluster ever studied - a fact which may force astronomers to revise many of their theories.

"This cluster is remarkable not only because it is so blue but because until now astronomers believed that blue clusters could only exist at early times in the universe," says Ulmer. "Yet this cluster is nearly a contemporary of our own."