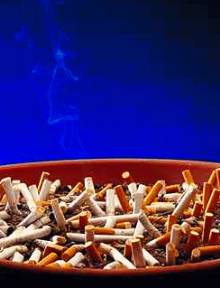 Adding strength to the argument that passive smoking causes lung cancer, the first comprehensive review of related research in a decade has provided new insights into the mechanisms of cancer induction by tobacco products. Published in the 2 June edition of Chemical Research in Toxicology, a journal produced by the American Chemical Society, the study highlights a link between nicotine addiction and cancer that can only be attributed to tobacco.

According to author Stephen Hecht of the University of Minnesota Cancer Centre, certain chemical compounds known as nitrosamines have been strongly linked to lung cancer formation. The compounds are found only in unburned tobacco and tobacco smoke, in contrast with other smoke carcinogens such as polyaromatic hydrocarbons which occur in foods and the general environment. This is important, says Hecht, because it implicates tobacco products as the only possible source of exposure to dangerous nitrosamines.

Summarizing the full gamut of studies of the biochemistry, biology and carcinogenicity of these tobacco-specific nitrosamines, Hecht suggests that by getting to grips with the way cancer is induced, more effective approaches towards the prevention of tobacco-related cancers can be designed. The use of chemical agents to inhibit carcinogenicity of tobacco smoke looks to be the most viable way to prevent cancer deaths, he says. First-phase trials for one such agent - an isothiocyanate called PEITC - are already set to go.