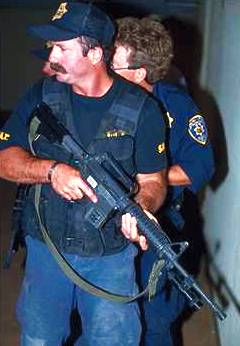 Not satisfied with a vest that stops bullets, police are to trial a designer vest packed with more gadgets than even Q could conceive of. Its dashing cut and stylish texture will disguise a techno-utilitarian capability that promises to revolutionize the science of policing. That or furnish the wardrobe department of the next Robocop movie with a bonanza of hand-me-down costumes.

Called Team Leader, its developers hope that this geek's dream will be a criminal's worst nightmare. How officers on the beat will take to it remains to be seen, with field tests scheduled for police departments in Baltimore, Miami and Los Angeles in the coming months. At which time they'll be able to send faxes, take photographs, scan barcodes and download satellite images - all by way of the amazing vest.

Indeed, the amount of hard and software available to wearers seems almost unlimited. Embedded in Team Leader's lining is an IBM-compatible personal computer, digital video and still cameras, voice recorder, and a host of scanners and sensors. There's also a "portable library" of maps, floor plans and other reference material, plus the capacity to send e-mail, print information remotely or indulge in video conferencing.

"If Team Leader were deployed at a murder site, for example, investigators could use the unit to track their routes and create a detailed 'map' of the scene," says Dan Irwin, project manager of the Department of Energy's Pacific Northwest National Laboratory who, with researchers from Mnemonic Systems, is developing the vest. "Upon discovery of a murder weapon, investigators could link the evidence to its geographical position with laser measurements and positional data, capture still and video images and record detailed audio and text notes. The digitalized evidence would be transferred immediately to an evidence custodian and could be recalled months or years later during trial through its assigned barcode."

Assuming, of course, nothing crashes or breaks down. With even the simplest of desktop computers prone to system and software failure, doubts have been raised about the efficacy of such ambitious technology in the field. Evidence that goes "missing" will likely keep a whole platoon of data-recovery para-legals in full-time employment. On the plus side, we can look forward to a whole new generation of COPS style police shows (with associated terrabyte sized web sites, natch). And for the cops, they can play Solitaire or Minesweeper instead of eating donuts.