Get Your Rocks Off 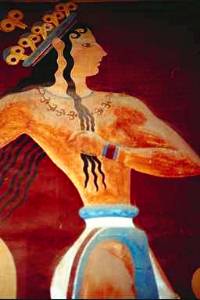 Science à GoGo's lurid fantasists were thrilled by a report on Nando.net of the recent discovery in downtown Salonika, Greece, of the world's oldest brothel, complete with sex toys. According to Helena Smith of the London Observer Service, archaeologists have been excavating the town centre site close to the Via Egnatia, the great road crossing the Empire from Rome to Byzantium, over the last thirty years. The bordello was found during a six month dig beneath the Forum and forms a small part of a building that extends under modern roads nearby. A large rectangular room contained what are described as sex toys. "Once we came across those, we were able to identify the room's use," said Dr Polyxeni Valeni, who led the excavation

"Ancient brothels have been found in other parts of Greece and abroad, such as Ephesus and Pompeii, but none has ever come with sexual instruments" said Dr Valeni. Somewhat coy about the exact nature of the toys that so excited these boys, the report describes only clay masks that would have been used by prostitutes to perform pantomimes for clients.

The establishment also offered a variety of bathing and sauna facilities in a circular arrangement of 25 baths around a central boiler.

"The oldest home of the oldest profession in the world" claimed Dr Valeni, justifying the scientific value of the find: "From this discovery we can learn a lot about the pursuit of fleshy pleasures." It is thought that the site was in use for about 130 years and allowed clients to roam naked through the building, enjoy food in a banqueting suite before bathing, or engaging the services of prostitutes, often children. Helena Smith indicates in her article that these children would have included both boys and girls.

Resonating with cultural meaning relevant to the present, and an obvious money-spinner, the site has immediately been added to the tourist trail. Culture Minister Evangelos Venizelos commented: "What can I say? We all love it."