A Tinkertoy Step For Mankind 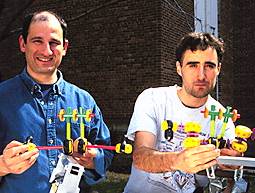 Exhibiting slightly less grace than Mr Bean, a contraption described as "a headless, armless, trunkless" robot - just a pair of legs really - walks, wobbles, limps, strides and staggers. It's made of Tinkertoy parts (plus a few odds and ends), and it can't stand still without falling over. Not something you'd think its creators at Cornell would want to brag about.

Yet bragging is exactly what they're doing. Says Michael Coleman, lecturer in mechanical engineering: "We believe this is the first two-legged, statically unstable 3-D passive-dynamic walker that can walk stably down a slope without any control system whatsoever." (they obviously don't go to the same pub as us - ed.)

It's that element of stability in motion that's making researchers reassess how humans amble from place to place. "How humans walk with their top-heavy, upright trunk atop two relatively spindly legs is not well understood," says Coleman.

"While some scientists believe that our nervous system largely coordinates balance and locomotion, our research further suggests that the passive interaction of gravity, inertia and ground contact may also be very important in coordinating our locomotion."

Certainly, the little walker is proof enough that you don't need a brain to achieve stability and balance. The device could also have important implications for designing biped robots, building artificial legs and improving rehabilitation for neuromuscular problems. Not bad for a few bits of Tinkertoy.