Bobbing for the Big Apple 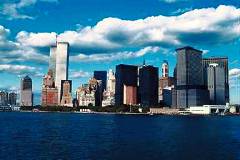 New York subways, airports and low-lying coastal areas could experience flooding if global warming produces more violent storms and higher sea levels, according to a new Columbia University study. Presenting the findings at the Metro East Workshop at Columbia in March, Vivien Gornitz, associate research scientist at the university's Centre for Climate Systems Research, warned that New Yorkers could be in for drastically warmer and wetter futures if current trends go unchecked.

Gornitz, who is also affiliated with the National Aeronautics and Space Administration's Goddard Institute for Space Studies, evoked three scenarios for the period 1995 to 2030. In all of them, including the best case scenario, any area less than six feet above sea level would be vulnerable to flooding.

That includes most of the lower Manhattan shoreline, coastal and island areas of Jamaica Bay, much of downtown Hoboken and Jersey City and south shore beaches in Staten Island.

State and local planners should start taking action now, she warned. Sea walls should be constructed around much of lower Manhattan and New Jersey, and runways at Kennedy, La Guardia and Newark airports should be raised above expected flood levels. In addition, pumping systems will probably be needed to keep the metropolitan subways dry. "Obviously, the best mitigating action would be to reduce greenhouse gases," she said, "but that is proving to be very difficult because many countries must agree to limit their emissions."